What is a Resistance Thermometer

A resistance thermometer is a temperature sensor which relies on the principle that a metal changes resistance according to its temperature. Not all metals are suited to the demands of accurate and repeatable temperature measurements and in industrial platinum tends to be the standard because it is highly repeatable, stable and produces results that have been standardised. It is also chemically resistant. Copper and Nickel elements are occasionally used, particularly in laboratory or research applications.

How does a Resistance Thermometer Work?

Resistance thermometers incorporate a resistive sensing element mounted insode a stainless steel probe (with associated cable, connector or termianl head). This element is usually a wire wound or thin film platinum element with a resistance of 100 ohms at 0°C. These sensors are commonly referred to as Pt100 sensors. The resistance change as the temperature changes is read by an instrument which passes a small current through the element. This will generate a small voltage and so the resistance can be measured and converted to °F or °C by the instrumentation.

Tolerance of the element

Under IEC 60751 there are various accuracy bands. Most industrial sensors use a class B element which has an inherent tolerance of ±0.3°C @ 0°C. Class A elements are also widely used which have a tolerance of ±0.15°C @ 0°C. Other elements are available with tolerances of 1/3, 1/5 and 1/10 of class B. Sometimes these are referred to as 1/3 DIN etc.

The resistance element will be connected to cabling which can be configured in either a 2, 3 or 4 wire configuration, depending on the application and instrumentation available.


A colour code and wiring diagram is shown below.

For a detailed explanation of wiring and bridge networks for resistance thermometers, please click here.

What are the advantages and disadvantages of Resistance Thermometers?

Resistance thermometers have their own merits for temperature measurement in that they are highly accurate, repeatable and stable, but it has perhaps easier to compare them to thermocouples in order to establish their advantages and disadvantages: 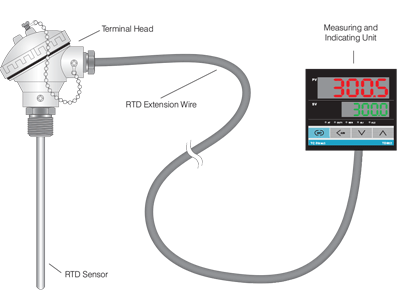 Our most popular style of resistance thermometer, ideal for most applications. Wide choice of terminations.

Ideal for rigid stem applications or where the sensor is shorter than 2" long, limited to 480°F.

RTD sensors designed specifically for the harsh environments in autoclaves

What is the formula for a resistance thermometer?

Where: Rt is the thermometer resistance at temperature t; R0 is the thermometer resistance at 0°C; and t is the temperature in °C. A, B and C are constants (coefficients) determined by calibration. In the IEC 60751 industrial RTD standard, A is 3.90802 x 10-3; B is -5.802 x 10-7; and C is -4.2735 x 10-12. Incidentally, since even this three term representation is imperfect, the ITS-90 scale introduces a further reference function with a set of deviation equations for use over the full practical temperature range above 0°C (a 20 term polynomial).

﻿The a coefficient, (R100 - R0)/100 . R0, essentially defines purity and state of anneal of the platinum, and is basically the mean temperature coefficient of resistance between 0 and 100°C (the mean slope of the resistance vs temperature curve in that region).

﻿Meanwhile, δ is the coefficient describing the departure from linearity in the same range. It depends upon the thermal expansion and the density of states curve near the Fermi energy. In fact, both quantities depend upon the purity of the platinum wire. For high purity platinum in a fully annealed state the a coefficient is between 3.925x10-3/°C and 3.928x10-3/°C.

For commercially produced platinum resistance thermometers, standard tables of resistance versus temperature have been produced based on an R value of 100 ohms at 0°C and a fundamental interval (R100 - R0) of 38.5 ohms (α coefficient of 3.85x10-3/°C) using pure platinum doped with another metal (see Part 2, Section 6). The tables are available in IEC 60751, tolerance classes A and B.