﻿﻿To achieve high stability, platinum sensor elements must be (and remain) in a fully annealed condition and contamination free. Support and sheath materials and construction must be carefully selected and clean to avoid sensor poisoning and strain.

While below 250°C contamination is rarely a problem, above this temperature, materials of construction, insulation and so on (particularly base metals, some forms of mica and borosilicate glass) can react with, or dissolve in the Platinum. So, special mounting methods are required. RTD’s that are hermetically sealed also need some oxygen in the filling gas to keep the problem elements oxidised and thus relatively harmless to the sensor.

﻿Other general points include the need to construct the sensors such that thermoelectric voltages, generated through the use of dissimilar metals (as per thermocouples), cancel one another out. Also, the insulation resistance between the RTD itself (including its internal connection wires) and the protective sheath (if any) must be adequate.

﻿Beyond this, the coil windings need to be non-inductive, current flow must not elicit significant self-heating and DC and AC (up to 500 Hz) must be provided for. Also, it is important to ensure that a negligible amount of heat will be conducted along the sheath, internal wires and insulators.

It is worth pointing out that the assemblies detailed can also be used with metals other than platinum. A wide range of shapes and sizes is available, the only major restrictions being wire support, contamination resistance and an adequate electrical resistance with appropriate insulation. For example, surface areas can be made large in proportion to the volume occupied to encourage fast response. Alternatively, the RTD can be made very small to allow for point temperature sensing or the sensor could be made long, or large, to facilitate temperature averaging over whatever length, or area, is required.

﻿Various construction methods have been used in the development of RTD’s. They include: Callendar’s original, with its mica cross around which the platinum wire was wound (problems included dehydration and embrittlement of the mica for exposed sensors, and condensation in gas filled and sealed versions), porcelain cross varieties with coiled wire (heavy and introducing time lag difficulties), twisted silica strip units forming a helical support for the coil, machined ceramic formers with grooves for the coil and so on.

﻿For laboratory standard instruments, the element may be a thin wire (typically 0.07mm) wound in a helical form and supported by frictional contact in a closely fitting thin walled glass, silica or alumina tube. This may be U shaped, or two separate tubes twisted together for mutual support, with platinum coils in each, connected at the bottom by a thick platinum wire sealed into the glass and welded to the coils. Four platinum connection leads are sealed into the top (two in each limb) and the whole assembly may be provided with a silica outer sheath (see Figure 6.1). All designs are aimed at producing a strain-free thermometer which can expand and contract on heating and cooling without the wire rubbing or being scratched by its support.

﻿For high precision thermometry above -189°C, the resistance element is cleaned and mounted in the glass or silica tube with the leads passing through a glass seal at the top. The device is then evacuated and back filled with dry air or high purity argon with a few percent of oxygen - to ensure that the platinum operates under oxidising rather than reducing conditions, such that remaining contaminants are preferentially oxidised during operation. Also, to maximise resistance between leads at higher temperatures, the leads are insulated from one another using mica, silica or sapphire.

﻿Meanwhile, for very low temperature purposes, capsule type designs are favoured (see Figure 6.2). Here, a thin walled platinum tube, about 50mm long by 5mm OD with a glass head, contains the resistance coil wound on a former. After evacuation, this type of device is filled with helium, for good thermal contact, before sealing.

﻿With all these devices, resistance at 0°C is usually 25 ohms, the a value is around 0.003926/°C and sensitivity is around 0.1 ohm/°C. However, for elevated temperature work, RTD resistance is reduced (to between 0.2 and 5 ohms at 0°C) to minimise shunting effects caused by insulation leakage at high temperatures. There are several designs for this kind of work, one being the National Bureau of Standards’ (USA) bird cage device (see Figure 6.3). This has eight parallel platinum lengths threaded through silica discs and connected in series, giving a resistance at 0°C of just 0.2 ohms, moving up to 1 ohm at 1,000°C. However, there are many designs: silica crosses with notches for bifilar helical coil winding (and other winding styles), silica rods with helical wiring grooves, silica strips, again grooved and so on.

﻿﻿Realistically it is not possible to achieve laboratory standard precision using these devices in industry, as price, fragility and poor vibration resistance will not permit. So the more general purpose, industrial type sensors are built to withstand conditions on plants.

﻿Modern pure ceramic materials, along with techniques for winding the wires into their ceramic support assemblies, combined with special annealing processes and advanced vibration resistance, means that high stability designs have made a substantial impact.

Firstly, the lower a coefficient metal doped platinum wire tends to be used (in accordance with the IEC standard, as mentioned above). Fine wire is drawn through laser drilled sapphire or diamond dies giving fully repeatable results without contamination. Then, manufacturers aim to provide as full support as possible for the wires, to enable best vibration and shock resistance, while also allowing the wires to be reasonably free to expand and contract without strain - thus also ensuring stability (a compromise situation).

A common style involves wires wound on glass or ceramic bobbin formers that have similar temperature versus expansion characteristics to that of the platinum wire. The windings are then secured and sealed with a coating of ceramic cement or glass (see Figure 6.4), selected to match the expansion rate of the platinum.

﻿Although tough and more than adequate for most requirements, these devices do exhibit poorer stability during temperature cycling, smaller operational temperature range (up to about 500°C) and greater hysteresis than RTD’s with partially supported coils. Another arrangement involves wire coils set in grooves (see Figure 6.5).

﻿As an alternative, partially supported coil constructions offer more flexibility in the ruggedness versus stability trade-off. A common assembly comprises helical platinum coils mounted in holes in a multi-bore alumina tube, with the coil being anchored by small amounts of glass (providing partial rather than full support, see Figure 6.6) such that a large proportion of the coils are free to move. The wires are then attached to more robust leads. Then again, another approach relies on embedding the platinum coils in alumina powder to reduce vibration effects further.

﻿These assemblies, if properly engineered, are the closest to meeting the requirements of the working standard thermometer, offering either low vibration resistance and very high stability, or higher vibration resistance and slightly lower, but still excellent stability. With these kinds of industrial devices, stabilities of a few hundredths of a degree over the range -200 to +850°C can be provided. Further, they need not be hermetically sealed - so air can circulate around the platinum wire where the environment allows. Typically, the sensors are about 25mm long by about 3mm diameter and the resistance element will be trimmed at 0°C to precisely 100 ohms.

﻿﻿A more recent development for platinum resistance thermometer construction is that of depositing the platinum material as a film (thick or thin) pattern on a suitable substrate. With thin film devices, platinum is evaporated onto the substrate using vacuum semiconductor fabrication techniques, whereas with thick film sensors, a glass/platinum paste is essentially silk screen printed on to the substrate. Both approaches allow the 'element' to be bonded to a flat or cylindrical surface as appropriate to the application (see Figure 6.7).

Performance can almost equal that obtained with the wire wound devices (certainly the more basic glass coated versions), particularly with thin film sensors over the range -50°C to 500°C. Benefits include: fast thermal response (due mainly to low mass and the intimate contact made with the substrate), insensitivity to vibration and lower cost than their wire wound counterparts.

﻿There is, however, some debate about the inherent stability of these designs, particularly over extended ranges. Firstly, they are not as free to expand and contract as their wire wound, partially supported alternatives (although this criticism applies equally to the glass sealed wire wound units). Secondly, with the small quantity of platinum used, they are more subject to contamination, and sealing them with glass is not necessarily the ideal answer. Thirdly, film characteristics can vary from batch to batch, Still, as lower cost surface temperature and air temperature sensors offering medium to high precision - say ±0.05% stability over the temperature range - they have a very useful role to fulfil. It is just worth remembering that equivalent stability for wire wound partially supported devices would be an order of magnitude better at least - ±0.005% stability. 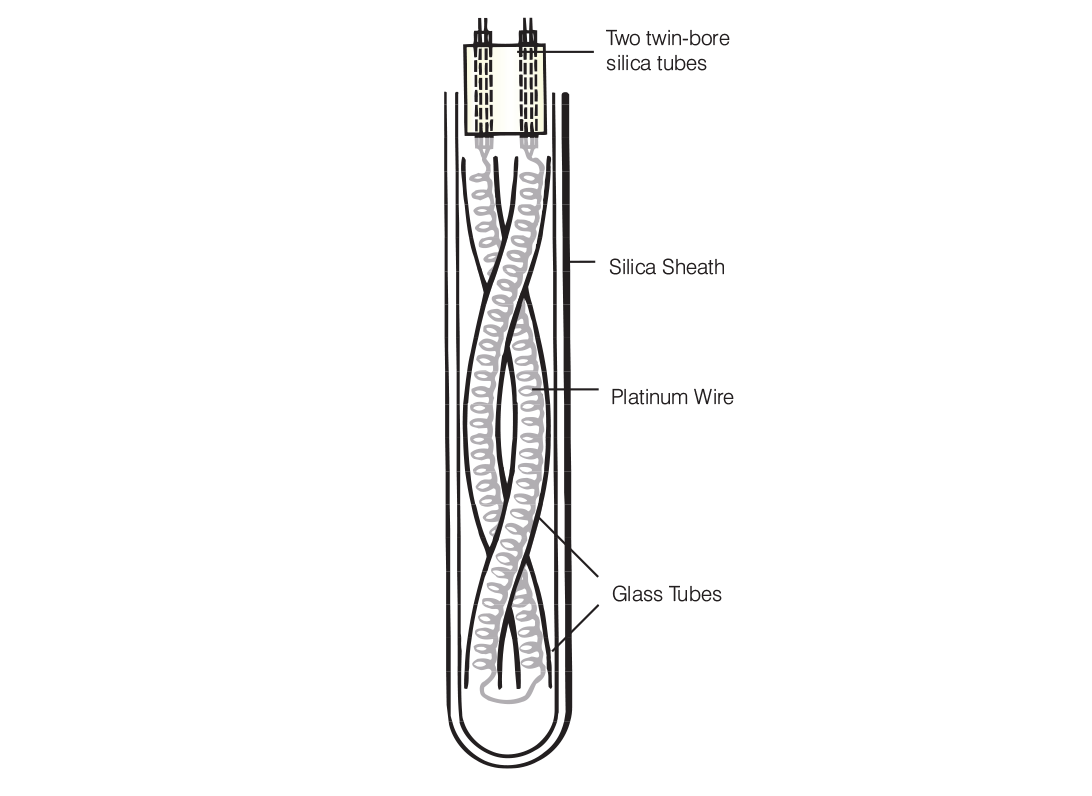 RTD Wiring Do I need an RTD or Thermocouple? RTD Pt100 Output Tables
﻿

﻿In order to measure the resistance of a platinum resistance thermometer, an electric current has to be passed through the sensor. However, ironically, in doing so the passage of the current produces a heating effect - and the temperature of the thermometer element is raised slightly above the equilibrium of the surroundings it is trying to measure. This is known as self heating.

﻿Clearly, self-heating effects will tend to become more significant when, for example, slow moving gas streams are being measured, as opposed to fast flowing liquids, where the heat transfer away from the sensor will render the effect negligible.

﻿To give an idea of how great this effect is, for an industrial style RTD immersed in water at the ice point, the effect of 1mA on a standard 100 ohm resistor will be about 20mK. In still air, it would be say 50mK; but move the current up to 3mA and the error is 0.5K. Heat generated in the RTD is directly proportional to the sensor resistance and to the square of the applied current.

﻿Meanwhile, the temperature rise is dependent not only upon the quantity of heat generated, but also the size and construction of the sensor as well as the nature of the thermal contact between it and the surrounding medium. Thus, by making thermal contact between the sensor wire and sheath as good as possible and similarly ensuring good contact of the sheath with the outside surroundings, the effect is minimized. Likewise, the energizing current needs to be minimized while still providing adequate sensitivity. 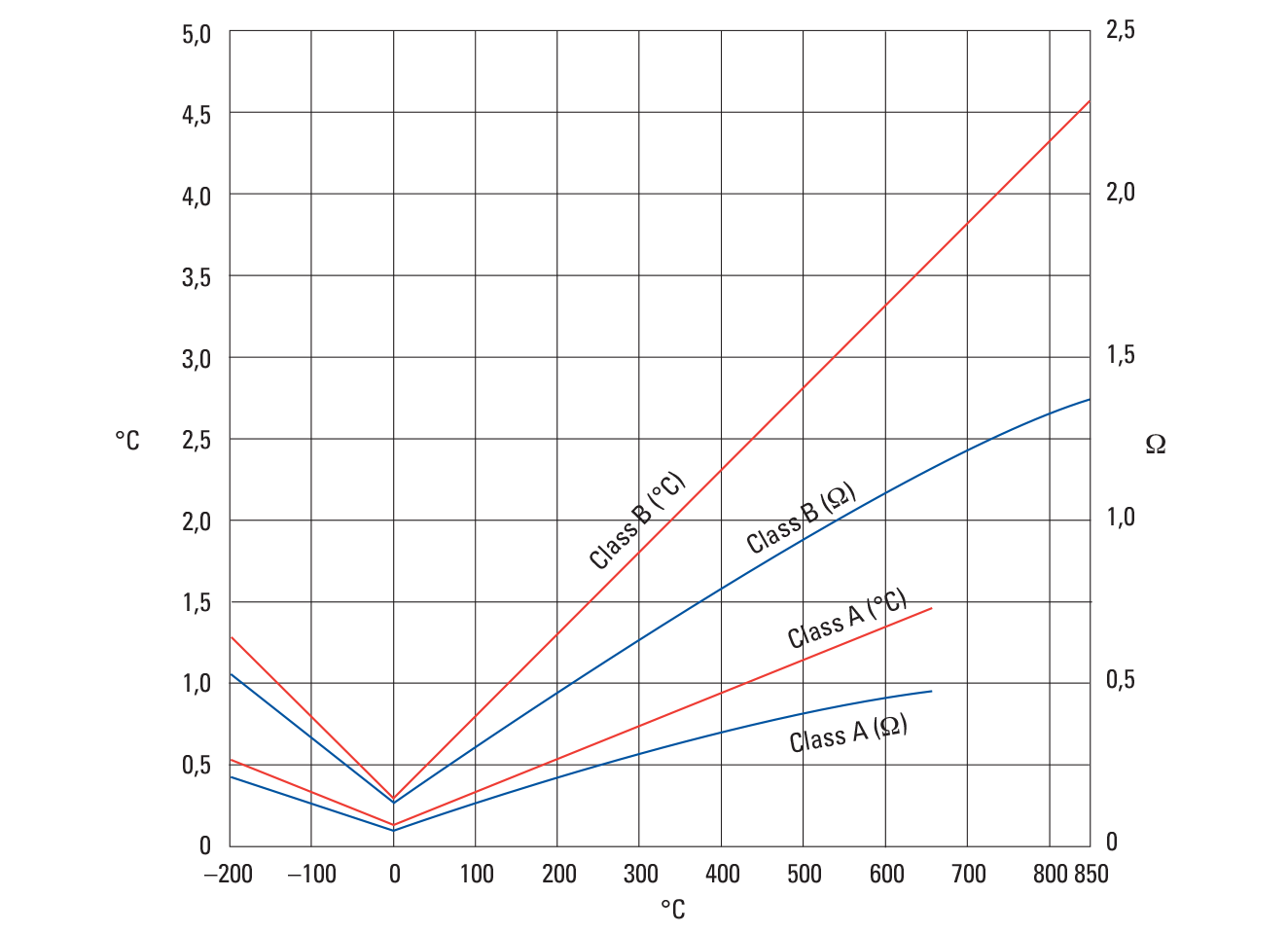 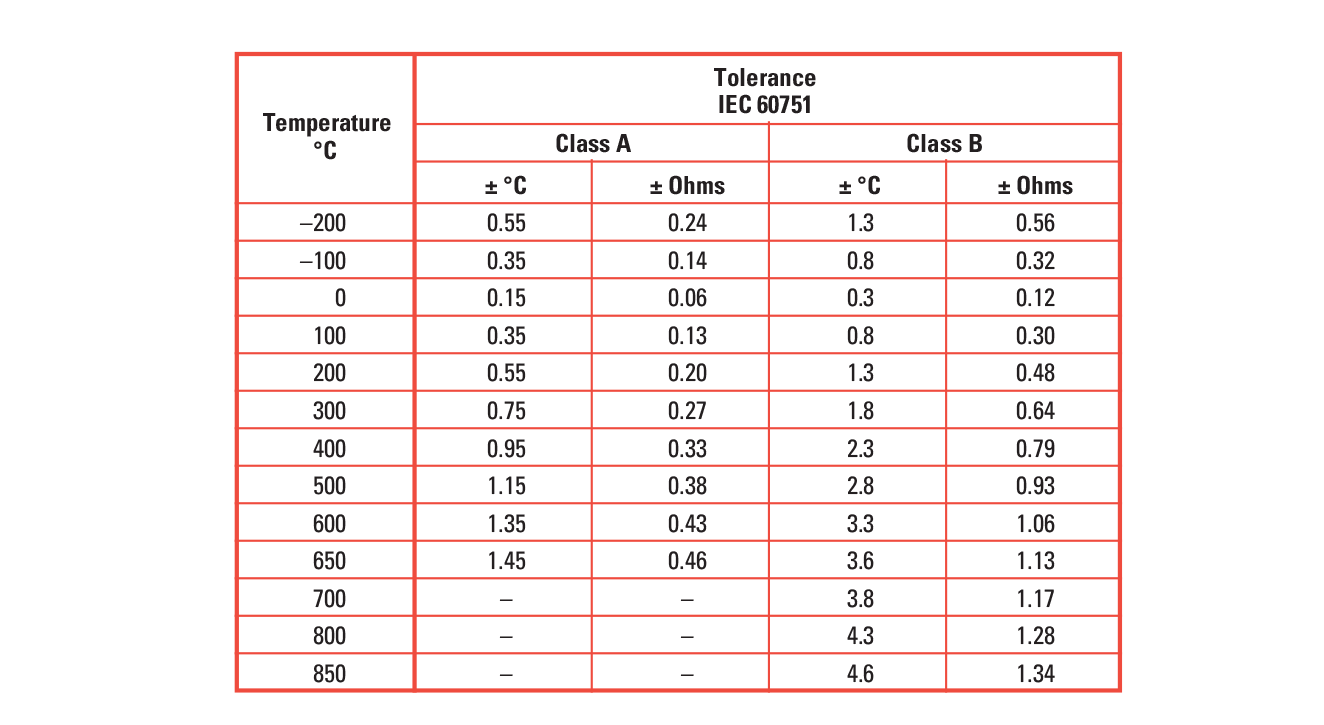