How does a Thermocouple work?

﻿﻿The voltage appearing across the ends of the conductor is the sum of all the EMFs generated along it. For a given overall temperature difference, T1-T2, the gradient distributions shown in figures 2.1 a, b and c produce the same total voltage, E. As long as the conductor has uniform thermoelectric characteristics throughout its length.

The output voltage of a single conductor as shown, is not however normally measurable since the sum of the internal EMFs around a completed circuit in any temperature situation is zero. So, in a practical thermocouple sensor, the trick is to join two materials having different thermoelectric EMF/temperature characteristics in order to produce a usable net electron flow and a detectable net output voltage.

Thus, two connected dissimilar conductors, A and B, exposed to the same temperature gradients given in figure 2.1 generate outputs as shown in figure 2.2. Basically, there is a net electron flow across the junction caused by the different thermoelectric EMFs, in turn resulting from the interaction of the gradient with the two different conductors. Hence the term, 'thermocouple'.

It is worth noting that the thermoelectric EMF is generated in the region of the temperature gradient and not at the junction as such. This is an important point to understand since there are practical implications for thermocouple thermometry. These include ensuring that thermocouple conductors are physically and chemically homogenous if they are in a temperature gradient. Equally, the junctions themselves must be in isothermal areas. If either of these conditions is not satisfied, additional, unwanted EMFs will result.

Incidentally, any number of conductors can be added into a thermoelectric circuit without affecting the output, so long as both ends are at the same temperature and that homogeneity is ensured. This leads to the concept of extension leads and compensating cables, enabling probe conductor lengths to be increased. See Part 2, Section 3.

Returning to figure 2.2, in fact the output, ET, is the same for any temperature gradient distribution over the temperature difference T1 and T2, provided that the conductors again exhibit uniform thermoelectric characteristics throughout their lengths. Since the junctions M, R1 and R2 represent the limits of the EMF-generating conductors, and since the remaining conductors linking the measuring device are uniform copper wire, the output of the thermocouple is effectively a function only of the two main junctions’ temperatures. In essence this is the basis of practical thermocouple thermometry.

There are important points to note at this stage. Firstly, thermocouples only generate an output in the regions where the temperature gradients exist, not beyond. Secondly, accuracy and stability can only be assured if the thermoelectric characteristics of the thermocouple conductors are uniform throughout. Finally, only a circuit comprising dissimilar materials in a temperature gradient generates an output.

what is a thermocouple?
How does a Themocouple work? Click here for technical data on Thermocouple Sensors.
﻿

﻿Beyond these, another crucial point to be aware of is that the thermoelectric sensitivity of most materials over a range of temperatures is non-linear. This is rarely an ideal world, and thermocouple thermometry no more ideal than any other. So, the temperature-related voltage output is not a linear function of temperature. Variable interpolation is required, as opposed to direct voltage reading (unless the temperature range to be measured is very narrow and the highest of accuracies is not a prerequisite).

﻿So, there are calibration tables for each thermocouple type, relating output voltage to the temperature of the measuring junction. Throughout thermocouple thermometry it is clearly necessary to refer sensor voltage output to these in some way to ascertain true temperature.

What is the Response Time of a Thermocouple?

﻿All sensors have a finite response time, and this has to be recognized if the temperature of the medium being measured is changing appreciably with time, yet high speed response is required - for example, where control, switching, or alarm actions need to be equally prompt. The inherent response time of the sensor is a function of its construction, and it is usually determined by a specific test condition. One such method is to plunge the sensor at ambient into rapidly moving water maintained at a different temperature. Clearly, this allows comparisons to be made.

﻿﻿The controlling parameter here is the effective thermal diffusivity of the sensor, k/(c x r) where k is the effective thermal conductivity, c is the effective specific heat, and r is the density. Basically, this function represents the rate at which a temperature change will be propagated through a medium. Thus, the ideal quick response sensor would be made of high conductivity material, have a low specific heat and low density. Unfortunately, there are many constraints affecting sensor construction, some of which can impair their response rates under this definition - but there are practical steps which can be taken to improve upon the situation. At the top of the list are ensuring the lowest possible thermal resistance at the sensor boundary (this contributes to the conductivity component), reducing the path length (and thus the sensor’s effective thermal mass), and using the smallest device possible within the constraints of achieving reliable measurement. Beyond these there are special points for thermocouples and RTDs.

﻿Where thermocouples are concerned, the highest response time is achieved by using an exposed junction. Where this is not practical, a grounded junction is typically used for fast response time as compared to an insulated junction. Typical response times for these assemblies are governed by, and vary with, the application environment and the overall diameter, as well as the construction details. Tests show that for insulated junctions to achieve 63.2% of a step change from 20°C to 100°C in water takes 0.015 seconds for a 0.010” OD mineral insulated thermocouple. Whereas a 1/2” OD MI thermocouple with a thick wall can take over 9 seconds. These figures are approximately half for grounded junctions.

﻿For resistance temperature detectors, the response times are always a function of the thermal mass (ideally low) and surface area against volume ratio (ideally high) of the sensors, plus the adequacy of contact with the medium concerned. This latter is frequently dictated by the degree of insulation and mechanical/environmental protection required - which effects the full sensor stem length - unlike thermocouples. Sealed sensors can be constructed offering response times in the region of 0.2 to 0.5 seconds. Marginally better responses can be obtained using thin film RTDs. However, heavy industrial devices installed in the walls of pressure vessels can take several minutes to respond.

What is an Averaging Thermocouple?

﻿﻿With thermocouples it is possible to arrange a number of sensors such that their combined outputs represent an average of their temperatures. There are various configurations.

﻿﻿﻿An immediate and important point to note is that the loop resistances of each separate circuit must be closely matched between the measuring junction and the common connection point. This is easily achieved simply by ensuring that all the thermocouple circuits are of similar construction and length (see Figure 6.1).

﻿﻿Another technique involves the use of resistors to balance the circuits to a single value (see Figure 6.2). If separate resistances are to be used in the thermocouple circuit, it is preferable to produce the resistors from the appropriate thermocouple materials. Alternatively, if conventional resistors are to be used, it is best to insert these in the copper circuits and to use components with as similar thermoelectric properties to those of copper as possible.

﻿﻿Ideally, the resistance required could be achieved by positioning two similar value resistors, one in each side of the copper circuit. This provides a degree of cancellation of spurious thermal voltages (see Figure 6.3).

﻿﻿Some caution is required with all of these methods. Although they will produce a reasonable average voltage, and thus temperature output from the thermocouples concerned, accuracy can be impaired by the non-linearity of thermocouple characteristics, and also the variation of the thermocouple resistances themselves with temperature.

﻿﻿Further, the measuring junctions must be electrically isolated from one another to exclude other parallel paths. Also, the effects of non-matched thermoelectric characteristics of added resistors should be considered. This can be minimized by containing them in an isothermal (thermally insulated) enclosure.

﻿﻿ One final point: the loop resistances of thermocouple circuits are best determined using a low frequency AC bridge. Even a small thermoelectric voltage can significantly affect the indicated value with some DC resistance measuring instruments. So, it is always worth reversing the polarity of a measurement to check that such affects are not present. 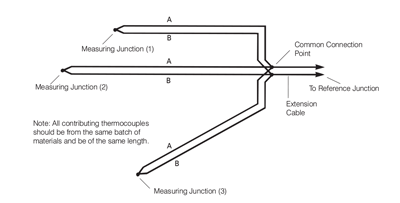 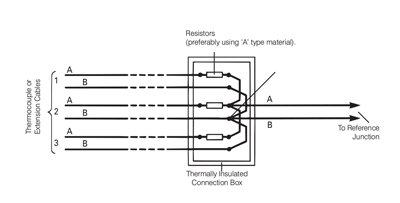 ﻿﻿﻿Temperature averaging can also be carried out by connecting the thermocouples in series. Here, all of the sensors require separate reference junctions; the output is then the sum of the individual thermocouple outputs, and the average temperature is simply this total divided by the number of contributing thermocouples. If a voltage measurement (zero or virtually zero current) is made, the circuit resistances are no longer important. However, other considerations such as measuring junction insulation and change of sensitivity with temperature still apply.